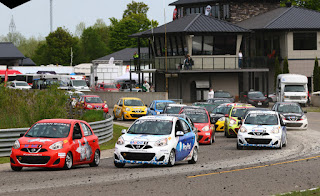 Mississauga, Ont. – The Nissan Micra Cup held its second event of the 2019 season this past weekend at the Calabogie Motorsports Park, southwest of Ottawa.
The action-packed Nissan Micra Cup races held on Saturday and Sunday saw a series of firsts, which included Kevin King claiming his first two victories of the 2019 season, as well as Austin Riley, Canada's first autistic racer, earning his first podium since joining the series in 2017.
Fans can check out all of the highlights from the Kyle Nash Race Weekend in the latest edition of Nissan Micra Cup Magazine (here), and in the full recap release, here. The new edition of the magazine features a special initiative that resulted in a collage of 400 children's photos on Kevin King's Micra S; a spotlight on Marie-Josée Massicotte, a third female driver that made her debut in the series on Saturday; and an interview with Nissan Micra Cup rookie driver Marco Signoretti.
The next Nissan Micra Cup event will take place on July 26-28 for the Summer Classic weekend at Circuit Mont-Tremblant in Québec.
For more information on the Nissan Micra Cup and its drivers, please visit their official site www.micracup.com.