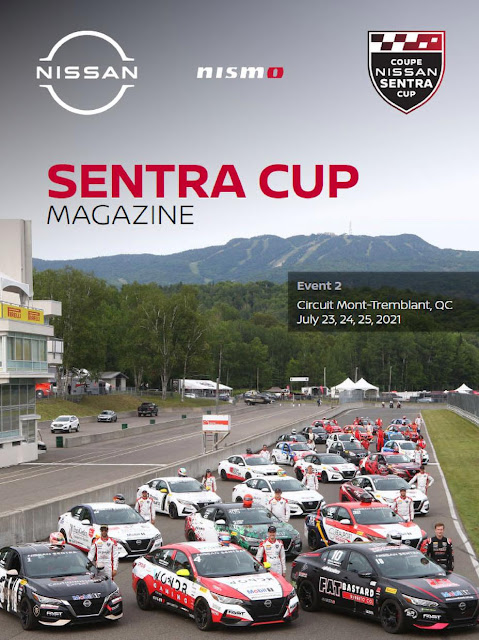 MISSISSAUGA, ON – The second edition of the 2021 Sentra Cup Magazine is out now, featuring highlights from Nissan Sentra Cup's second event of the 2021 season at Circuit Mont-Tremblant, including an exclusive interview with François Dumontier, President of Sports Development Group – ASN, Canada.

With nearly 30 years of experience in Canadian motorsport, Dumontier visited Circuit Mont-Tremblant to discuss the Nissan Sentra Cup and how it continues to bring drivers with a range of experiences from across Canada all together in a one-make series.

The action-packed weekend saw Jesse Lazare take the winning spot in the third and fourth races of the season with Kevin King finishing second. In Saturday's race, Lazare, King, Jesse Webb and Gavin Sanders battled it out fiercely during the 40-minute race – held without a single incident, but Lazare claimed a clear victory ahead of King. Sunday's race saw Lazare finish first, followed by King and then Sanders, however Alexandre Fortin, who finished fifth was promoted to third after Sanders and Webb were penalized for avoidable contact.

Fans can read all the race weekend highlights and the interview with Dumontier in the latest edition of the Nissan Sentra Cup Magazine (attached).