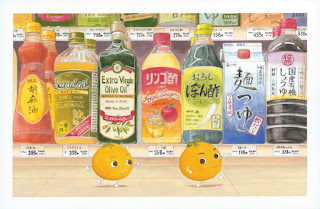 “Kibako no Cho” is the story of a boy who finds a butterfly wing in his father’s room and draws dozens of butterflies. The picture then comes to life with the wing and butterflies soaring through the night sky. The evocative descriptions of each scene can be vividly imagined and the story’s use of onomatopoeia won high praise.

"Mikan Kyodai no Tanken" is the tale of a bag of mandarin brothers on a supermarket shelf who decide to explore their store. The book’s detailed drawings of the supermarket’s products, product labels and point-of-purchase advertisements were highly rated.

The competition is hosted by the International Institute for Children's Literature, Osaka, with the aim of developing children’s imagination and creativity. It was launched in 1984 to commemorate the opening of the institute. Nissan has sponsored and supported the competition since the beginning.

The competition also gives talented amateur authors and illustrators an opportunity to have their works published. More than 124,000 entries have been received since the start of the program and 69 books have been published.

Over the past 38 years, Nissan has donated more than 270,000 books to libraries and childcare facilities across Japan, as well as to Japanese schools and Japanese language schools overseas.